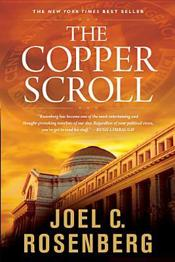 This is Christian/Conservative spy fiction, if that’s even a thing? It’s perhaps telling that the cover has a praise quote from Rush Limbaugh, and there’s another from Sean Hannity on the inside flap. (The author was on Limbaugh’s payroll earlier in his career, apparently.)

This is #4 in a five-book series – “The Last Jihad” series. Apparently an apocalyptic holocaust of some kind happened in book #3, so there’s a supernatural/religious aspect to it all.

Because of the above points, I would probably never have picked up this book by myself. But I was given this book for my birthday, and I was determined to read it.

And here’s the thing: this dude can write a thriller. This book is an absolute page-tuner. It reads fast and easily. The chapters are short. They skip around the globe, and they’re are all time- and location-stamped, because lots of things are happening at once.

The plot involves the discovery of The Copper Scroll (a real thing) and what that means for Mankind. Lots of people want the treasure it leads to, and – more importantly – it might justify the rebuilding of the Temple on the Mount in Jerusalem, which would throw the geopolitics of the Middle East into chaos. There’s lots of action, lots of intrigue, lots of guns, lots of people dying.

The series this book is part of has raised some controversy, I understand. Part of the larger plot involves the revelation of Christianity, and the mass (voluntary) conversion of Jews and Muslims. Also, there are some typical Christian/Conservative bugbears – the UN is not portrayed very positively, and there’s a sinister Muslim plot of some kind.

Though, I was general happy with the portrayal of faith. It’s not too heavy-handed. It clearly has a worldview and a bias, but it’s handled well (save for one weird spiritual detour in the middle of a gunfight).

This book is a banger. I couldn’t put it down.