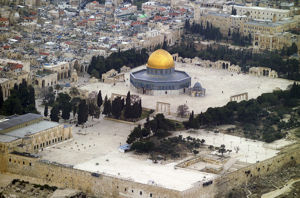 This is a holy site in Jerusalem. It’s actually several overlapping sites, important to all three Abrahamic religions.

The Temple Mount is one of the most contested religious sites in the world. The ownership and management is imperfectly split between Jews and Muslims. It was controlled by Muslims until the Israelis captured Old Jerusalem in the Six-Day War of 1967.

Currently, the site is open to all faiths, but Jews are prohibited from praying there. Violence occasionally erupts there, and the rules of visitation and behavior change with the state of the relationship between Israel and the Palestinian Authority.

The Biblical reference to the rebuilding of the template can be found in Zechariah 6:13 and 15:

Those who are far off will come and build the temple of the Lord. Then you will know that the Lord of hosts has sent me to you. And it will take place if you completely obey the Lord your God.

In the last days the mountain of the Lord’s temple will be established as the highest of the mountains; it will be exalted above the hills, and all nations will stream to it.

I was reading a political thriller novel which involved a Middle Eastern dispute of the Template Mount. I knew what it was, vaguely, but was short on specifics.