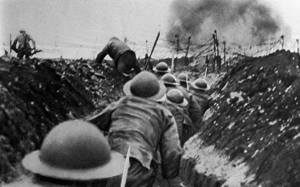 This is a form of very acute Post-Traumatic Stress Disorder (PTSD), coined during World War 1.

Soldiers suffering from shellshock acted as if they suffered head wounds, but were not visibly wounded in any way. Yet they had extreme effects on their ability to reason, their general demeanor, and even their ability to walk and perform basic physical functions.

World War 1 was known for it’s inhuman conditions, and particularly for the use of artillery. Combatants engaged in trench warfare on the Western front were subjected to hours, days, and even weeks of non-stop artillery barrages. The sheer intensity, scale, and duration of artillery fire has never been equaled in other conflicts.

Shellshock may have been caused by some combination of a natural stress reaction and closed head and inner ear injuries caused by multiple, extended close-proximity explosions.

I’ve been doing a lot of research on World War 1, and I’ve run across the phenomenon several times. In particular, the Apocalypse: World War 1 series has shown several videos of soldiers suffering from shellshock.

Personal story: During a Marine Corp training exercise at Camp Pendleton when I was in my 20s, I had to belly crawl past a contraption that “exploded” every few seconds. It was a large metal barrel that would fill with propane and get ignited by a spark plug. I remember it was the loudest sound and largest pressure wave I had ever experienced in my life. I also remember feeling several physical effects from the experience later that day.