Why do we associate this with women? 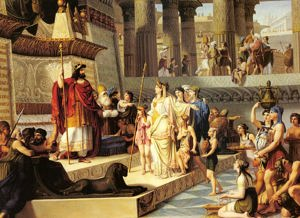 “Solomon and the Queen of Sheba,” by Giovanni Demin

This is an ancient kingdom thought to exist in the southern Arabia or Eastern Africa.

In the Hebrew Bible, Sheba and her queen are mentioned in 1 Kings, Chapter 10:

When the queen of Sheba heard about the fame of Solomon and his relationship to the Lord, she came to test Solomon with hard questions. Arriving at Jerusalem with a very great caravan – with camels carrying spices, large quantities of gold, and precious stones – she came to Solomon and talked with him about all that she had on her mind.

This queen is never named, however the same story appears in the Quran where she is named “Bilqis.”

In Ethiopian tradition, the queen is named “Makeda.” Ethiopian legend says that the first Ethiopian emperor was the product of a union between Makeda and Solomon.

A book in the Christian apocrypha claims that Sheba was ruled by a succession of 60 females. Females seemed to have a high position in Sheba. From Bible Atlas:

The high position occupied by women among the Sabeans is reflected in the story of the Queen of Sheba and Solomon. In almost all respects women appear to have been considered the equal of men, and to have discharged the same civil, religious and even military functions. Polygamy does not seem to have been practiced.

The “Queen of Sheba” has become an archetype for a royal female who commands great wealth, or a generally powerful woman.

Given the history, the word has assumed femininity:

I’ve been aware of the association for years.

It specifically came up in Cutting for Stone which was set in Ethopia. One female character comments on another’s success, saying, “You have become a real-life Queen of Sheba!”