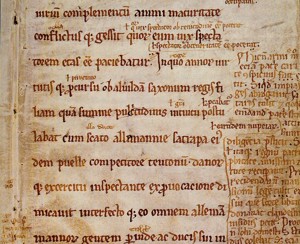 These are notes and edits in the margins on ancient texts. This was apparently common, as transcribing books was expensive and time-consuming, and authors had no easy way to edit them. Today, these would likely be footnotes, endnotes, or parentheticals.

I also saw this referred as a “gloss” or “glosses,” which is defined similarly.

The singular is “scholium.”

The book How to Read a Book discussed Isaac Newton’s work in the chapter on how to read science texts:

[…] merely glancing at much of the interstitial matter, but being sure to find and read the passages where Newton is making his main points. One of these comes at the very end of the work, at the close of Book III … This “General Scholium” is Newton called it, not only sums up what has gone before but also states the great problem of almost all subsequent physics.

Newton would release these notes as their own work.