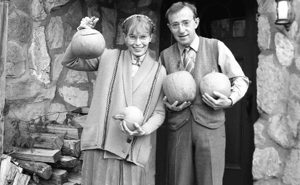 This was a character in the Woody Allen film of the same name. Leonard Zelig is an average man who has the ability to take on the appearance and characteristics of people around him.

The character gave birth to a general definition:

a chameleonlike person who is unusually ubiquitous

She had a Zelig-like quality where medical disasters were concerned.