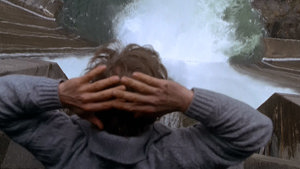 Right before Richard Kindle jumps off the dam in The Fugitive

Richard Wagner was a German composer in the 1800s. (In English, his last name is pronounced “vog-ner.”)

He’s most well-known for his epic opera cycle The Ring and specifically one of its musical numbers, The Ride of the Valkyries This was the music played through the helicopter speakers in the famous beach battle scene of Apocalypse Now.

Wagner was known for his grandeur and scope. It took him 26 years to complete The Ring, and the four parts would take about 17 hours if performed continually. Wagner intended for The Ring to be performed in a theater custom-made for it.

With this in mind, “Wagnerian” describes something of large and dramatic significance; something done on an epic scale.

In his review of The Fugitive, Roger Ebert wrote:

Consider his virtuoso opening chase sequence, which after the train crash leads to a series of drainage tunnels and finally to a spectacular dam, where Kimble risks death for a chance at freedom, and dives into the cascading waters in a moment that can only be called Wagnerian.

I was familiar with Wagner, and I had seen the The Fugitive, so I had some idea of what was meant here. My curiosity was in how it would be described. It’s a word that only makes sense if you know something about Wagner.

Most definitions I found of Wagnerian were along the lines of:

Of, relating to, characteristic, or suggestive of Wagner or his music, stage operas, or theories

This is literally true, but it means nothing if you don’t know anything about Wagner or his music. I kept looking, and I found this in a Quora answer:

The word Wagnerian is used, therefore, as an adjective to describe anything elaborate, massive or impressive by comparing it with some aspect of Wagner’s operatic productions.

That sounds about right. Again, I’ll refer you to the beach battle scene of Apocalypse Now, because I just don’t know that there is a better modern illustration of the term.