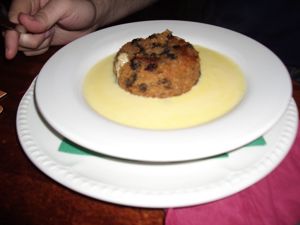 It’s an English dessert. From Wikipedia:

Spotted dick (also known as “spotted dog” or “railway cake”) is a traditional British steamed pudding, historically made with suet and dried fruit (usually currants or raisins) and often served with custard.

“Spotted” is a clear reference to the dried fruit in the pudding (which resemble spots). “Dick” and “dog” were dialectal terms widely used for pudding, from the same etymology as “dough”

On an episode of Just Shoot Me, Jack gets back from London and talks about how much he loved “Spotted Dick,” much to the amusement of Dennis.