What does the "new" mean? 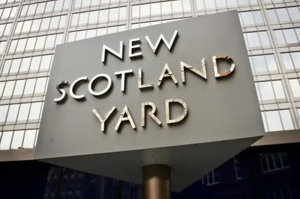 The sign in front of the New Scotland Yard building

Scotland Yard is the headquarters of the Metropolitan Police of London. It was named this because the public entrance was on a street called Great Scotland Yard.

“Scotland Yard” has become a nickname for anything involving the London police.

This name for the building is prominently featured on the front of it, and there’s a unique revolving triangular sign which also bears the name.

I was reading a mystery novel set in London, and a detective of the MPS told a cab driver to take him to “New Scotland Yard” as if it was a place everyone should know.