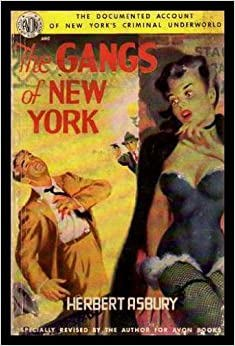 This was originally a book written in 1928 about the gangs operating in New York during the 1800s, prior to the Italian Mafia.

Most people of this generation know this as the 2002 movie Gangs of New York starring Leonardo DiCaprio, Daniel Day-Lewis, and Cameron Diaz. That film was loosely based on the book.

A book about medical history referred to “Gangs of New York Manhattan” several times, which made me think there was some general reference. However, the author appears to be using the name of the film to refer to a time period, which seems odd since the film wasn’t that popular – certainly not enough to be a common reference for all his readers.