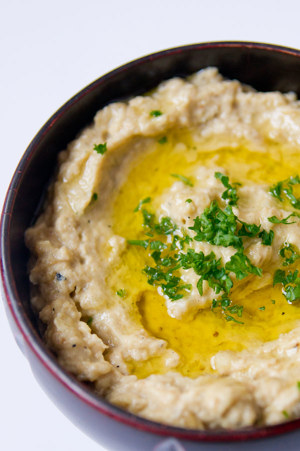 A Lebanese food, which is essentially hummus made with eggplant, rather than chickpeas. Common ingredients are mashed eggplant, olive oil, lemon juice, and other seasonings.

It is consumed in a similar way as hummus – as a dip, or spread on bread.

I was looking for hummus in Costco, and found some Baba Ghanoush. I had heard the name over the years, but never had any idea of what it actually was. I bought it and have been eating it like hummus. It has a similar consistency, but a smokier taste (the eggplant is cooked).