Is this is a specific place? 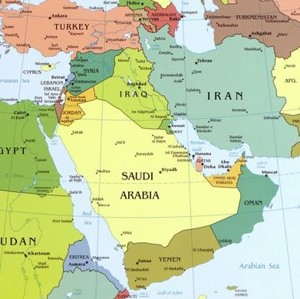 No, not really. It is specifically not a single country.

Most generally, this is the entire Arabian Peninsula, which currently includes the countries of:

The root of the word is “Arab,” which has meant all sorts of things over the years, including “desert” and “nomad.” This fits with the ancient history of the general area being a desert inhabited by nomadic wanderers. Perhaps they came to be called “Arabs” and the area in which they wandered came to be called “Arabia.”

But different people in different times have used the word “Arabia” to refer to different subdivisions of the peninsula, and sometimes even north into mainland Asia.

The country of Saudi Arabia effectively “claims” the name by being the largest by far and having “Arabia” in its name, but their claim is nothing special. There was a man named Saud ibn Muhammad ibn Muqrin, who became the patriarchal head of the dynasty, which became known as The House of Saud.

Saudi Arabia literally means “the Saudi Arab kingdom,” or, effectively, “the part of Arabia controlled by the Saud family.” Theoretically and linguistically, if the royal family were to be overthrown, the country would need to be renamed. It’s only been in formal existence since 1932, and the area has been inhabited for millennia.

I actually found a Quora question called “Does all Arab ancestry originate from Saudi Arabia?” Some of the answers seemed to imply some annoyance from (presumably) non-Saudis:

[…] Various DNA tests have been run on members of the Saudi royal family and the result is that genetically, they are Indians from India.

Since Arabia is a peninsula, the east, south, and west borders are settled. But how far north does it go?

It came up quite a bit in a book about the oil industry. Prior to 1932, the area was just generally called “Arabia.”