Me and My Gas Guzzler 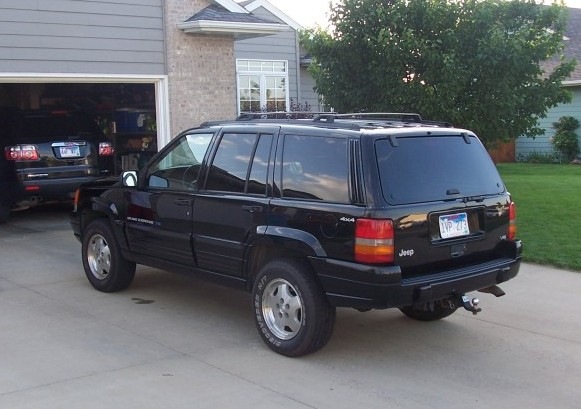 I drive a 1997 Jeep Grand Cherokee. it’s a weird story about how I came to be driving this vehicle, but suffice it to say that I love it. I’d like to drive it until the wheels fall off.

The only drawback? Gas mileage. It gets about 13 mpg. I thought perhaps something was wrong with it, but I went asking around on some forums, and that’s about right. it’s got a 5.2L V-8, full-time 4WD, and body-on-frame construction, which leads it to be pretty heavy.

This gas mileage thing bothers me. I’m not an tree hugger, by any stretch, but all things considered, I’d rather save the environment than damage it, so I feel pretty bad about driving around a gas guzzler. But, I’ve been thinking about this, and I want to toss out a justification that might be just be a lame attempt to make myself feel better. Here goes –

This Jeep exists. There’s nothing we can do about that. It was manufactured 13 years ago, it gets crappy mileage, and that’s that.

If I have a sudden bout of guilt, and sell the Jeep over the mileage issue, what have I accomplished? The Jeep still exists, whether I’m driving it or someone else is. it’s just now getting crappy mileage for someone else. The bottom line is that someone is going to get 13 mpg in this thing, whether it’s me or the kid down the street.

The inescapable point here is that selling this Jeep does nothing for the environment. The only way to end its reign of terror over Mother Earth is to put it down. Destroy it, so no one drives it again.

So, let’s go all “Cash for Clunkers” on it, destroy the engine, and buy a more fuel efficient car. A gas guzzler is off the road, and I’m all planet-friendly now.

If I destroy this Jeep, I now have to go buy a new car. That car might get better mileage, but it has to be manufactured, transported, and sold, and the environmental costs of that are huge.

This is the dirty little secret of Cash for Clunkers – the resources necessary to build a car are fairly astonishing. Yes, Obama got 665,000 gas guzzlers off the road, but what no one talks about is that he created a market for 665,000 new cars, with all the environmental costs associated with that. By throwing away 665,000 functioning cars and replacing them with new ones, we essentially re-manufactured 665,000 cars. We built each one of them all over again.

(Yes, I realize there were other reasons behind Cash for Clunkers. But I’m just talking about the environment, for the moment.)

(And – while this may be a little off-topic – some of those cars were very awesome and still had perhaps decades of productive use left in them. Perfect example: my buddy Dave posted about this sweet BMW 7-series, destined for the scrap heap. If you love the Earth, I defy you to tell me how throwing this car away is a net positive, all costs considered.)

“So buy a used car!,” you say. “That way the manufacturing cost is already incurred!” It doesn’t matter. If I buy a used car, that means someone else doesn’t have that used car, which means they have to buy another car. And so on. Eventually, this trickles up to someone, somewhere standing in a automotive showroom shelling out money for 3,000 pounds of gleaming steel, rubber, and glass. It may be multiple levels removed, but a used car purchase almost always creates a need for a new car purchase.

So, is the environmental drawback of my 13 mpg Jeep offset by the fact that it keeps the world from having to manufacture yet another car? To destroy it only creates the need for another car, and the automotive industry is only too excited to fill that need. And do we really need another car in the world?