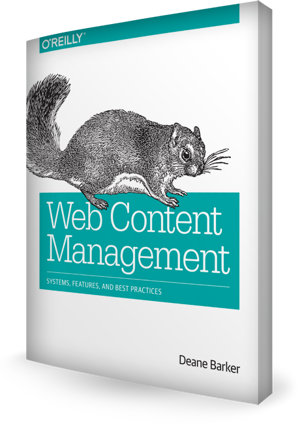 For the last few months, I’ve been working on a book for O’Reilly: Web Content Management: Systems, Features, and Best Practices. It’s a reasonable distillation of everything I’ve learned about web content management in almost two decades of success and failure (hopefully more of the former than the latter…)

O’Reilly has an interesting system of pre-order, whereby you can buy the book and get a series of e-book chapters as its written. They’re rough and not finished, but you can start the reading the book before it’s even published. My book has had two sets of chapters released – 1-4 and 5-7 – and is due for 8-10 in a couple of weeks. (I’m not sure if there will be another, since the entire book is tentatively planned at 14 chapters). You can pre-order here.

O’Reilly books are well-known for their covers of hand-drawn animals. To my dismay, I learned that you don’t get to pick – the O’Reilly art department instead proposes designs to you, and you have a limited ability to object. They first came up with a dog, which absolutely wasn’t going to happen (I don’t like dogs). Then a bird, which just didn’t seem right either. Then my editor called and said, “Look, we can go back to them one more time, but you’re gonna have to make one of the three work.”

God was apparently smiling on me, because that third animal was the pygmy flying squirrel, which frankly couldn’t be more awesome. Thus, my book’s website: The Flying Squirrel Book.

The process of writing has been more difficult than I expected. Finding the time is a huge challenge, but the hardest part has been fighting the image of perfection in my head. I’ve waited so long to write this book, that I avoid writing because I’m afraid the actual words won’t live up to my expectations.

Additionally, “walking back the knowledge” has been challenging. I’ll go to explain Concept A, then get a few pages in before I realize that I’m not explaining Concept A, but Concept D. I actually have to back up and explain Concepts A, B, and C first. Honestly, you don’t realize what you actually know until you have to write it all down.

The mechanics of writing have been fun. O’Reilly has a system they call Atlas (alas, not available commercially yet), which allows to me to write in a Markdown-ish format called AsciiDoc. I maintain these in a Git repo. These are then converted to HTML (I could write directly in HTML, if I wanted). The HTML is then turned into all sorts of formats, in almost real-time. I can “build” the book into print-ready PDF, MOBI, HTML, etc. in seconds.

So, that’s what I’ve been working on since last year. With a bit of luck, the book will be out in the fall. Once I finish writing, we go to “pre-production,” where it gets copy-edited and indexed, then apparently I get a box in the mail with a bunch of books.

That’ll be a good day.

A long-overdue update to this –

However, O’Reilly has declined to let me publish a second edition. They told me that “CMS is no longer strategic for us.” They did offer me a “rights reversion” where I could take possession of the copyright, if I wanted to do something with it myself.

Incidentally, I’ve written another three books since then.