Thomas Jefferson and the Tripoli Pirates: The Forgotten War that Changed American History 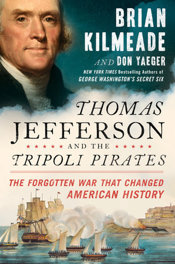 This is a recounting of the First Barbary War. That event is important because it was the first overseas conflict the young United States ever fought in.

The Barbary Coast is the Northern coast of Africa, against the Mediterranean. In the late 1700s, this area was teeming with pirates who would rob ships and take the crews hostage for ransom. We signed the Treaty of Tripoli in 1797 to try and stop this, but that was quickly violated. The First Barbary War was a series of naval conflicts (and one land battle) that sought to put down the pirates for good.

(It didn’t quite work, so we had the Second Barbary War in about 1811. That one worked.)

This book recounts all the conflicts of that first war, which were spread from 1801 to about 1805. The book is a little dramatic in places, the United States or portrayed as the dashing heroes, standing up against unmitigated villains.

Which leads to me another point – this is a book from Sentinel Publishing, which is a very conservative wing of Penguin. The (purported) author (I’m suspect it was mostly ghostwritten by the co-author) is a host of Fox and Friends. (The acknowledgements start by thanking Roger Ailes, Bill O’Reilly, and Glenn Beck.)

So, this book is very pro-America, and it holds this conflict up as the first time that America would refuse to be pushed around. There’s a weird emphasis on religion – the Barbary coast was Muslim, and there’s never a missed opportunity to portray America as standing up for Christendom against the forces of Islam.

Is this true? I don’t know. I’m sure it was partially true, but was it the main theme of the conflict? Was the larger purpose religious, or simply economic? A mixture of both?

(Notably, I couldn’t find any reference to Article 11 of the Treaty of Tripoli that stated “As the Government of the United States of America is not, in any sense, founded on the Christian religion…” The entire treaty itself is only given a passing mention.)

That said, it’s a credible history of an interesting period in the early years of this country. Very approachable. An easy read.