Ghost Fleet: A Novel of the Next World War 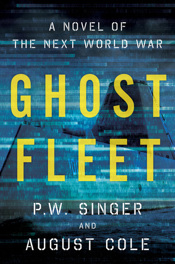 A fairly nondescript techno-thriller about World War 3. In my attempt to replicate my love of Red Storm Rising, I took a chance on it. It was okay.

The plot centers around the Zumwalt, one of a series of new stealth destroyers (a real thing, apparently), and its massive railgun (not a real thing, I don’t think). The Chinese invade Hawaii, and all hell breaks loose.

There are some interesting aspects of it, especially the fight in outer space. The conflict starts with a war between satellites, and suddenly America goes blind. If we can’t see from outer space during a war, a lot of bad things can happen, it turns out. Scary how much our national defense involves being about to see from space.

There’s also some interesting depictions of what would be guerrilla warfare among the resistance in Hawaii. And there’s a weird scene somewhere in the middle involving a retailer obviously supposed to be Wal-Mart – but the plotline appeared to be completely abandoned. I kept waiting for the author to come back it, but he never did.

The book was okay. I didn’t love the ending – there’s a stab at sentimentality in the relationship between the captain of the Zumwalt and his father that never quite came together. But, all in all, a decent read.