Argo: How the CIA & Hollywood Pulled Off the Most Audacious Rescue in History 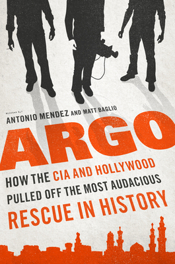 So, here’s the problem with this book: the situation is ultimately just not that exciting. Yes, the movie was apparently great, and the set-up is amazing – diplomats hiding in a hostile country, escaping through disguise, etc. – but in the end, the CIA forged some documents and they all walked out.

I have not seen the movie, but I have to think it took significant dramatic license to spice this thing up for the screen, because, as it’s written here, there’s just no dramatic tension. Ninety percent of the book is the build-up to the exfiltration, which is, in the end, pretty anti-climactic.

I did like the history portion of it – I got a good understand of how and why the hostage crisis happened. The most exciting part of the book may have been in the beginning, when the author was describing the initial invasion of the Embassy and how the staff inside were captured. I also enjoyed the introduction to the CIA’s disguise and forgery programs. I always suspected this existed on some level, but it was interesting to read about it from the inside.

There are a lot of names. I lost track over time of who was who. You eventually coalesce down to the six that were held in the Canadian diplomatic residence, but there are dozens of people mentioned by name, and it might have helped to write them down.

It’s a quick book. Pounded through it in about three hours. But in the end, it’s a bit of a letdown.