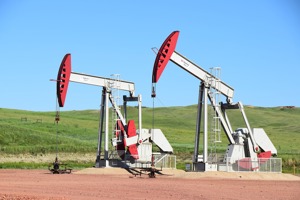 This is a oil well drilled blindly, meaning without radar or other confirmation of an oil field below it. A wildcatter drills a bunch of wells in an area where oil has been rumored to exist, and hopes one of them hits a field.

Wildcat wells are drilled where little or no known geological information is available. The site may have been selected because of wells drilled some distance from the proposed location but on a terrain that appeared similar to the proposed site.

The origin of the term is by legend:

According to tradition, the origin of the term in the petroleum industry comes from Wildcat Hollow, now in Oil Creek State Park near Titusville, Pennsylvania. Wildcat Hollow was one of the many productive fields in the early oil era. A speculator who risked his luck by drilling in this narrow valley shot a wildcat, had it stuffed and set it atop his derrick. The mounted cat gave its name to the hollow. Because the area was largely untested and somewhat away from Oil Creek Flats, the term Wildcatter was coined, describing a person who risked drilling in an unproven area.

“Wildcatter” has become a stereotype meaning someone who is daring, speculative, or even reckless in their pursuit of wealth. In fact, another definition I found reads:

a person who promotes risky or unsound business ventures

A book about the oil industry used the term many times, but never defined it. After a dozen references, I looked it up.