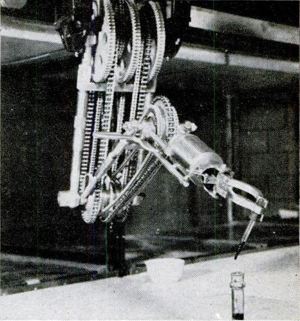 This is a robot arm, used as a remote manipulator by a human (as opposed to one that is controlled by the robot itself). The term came from a 1942 book by Robert Heinlein about a boy named Waldo who creates such an arm.

I came across it in the plot of an adventure for the James Bond 007 role-playing game. It referred to a villain trapped in an iron lung who had a “waldo arm” to interact with the world around him.