Why is this suffix so prevalent in some regions? 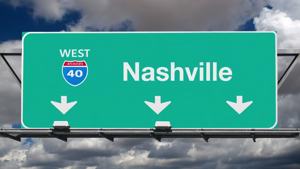 The French were allies during the American Revolution. From Wikipedia:

France’s help was a major and decisive contribution towards the United States’ eventual victory and independence in the war.

This led to positive French sentiment after the war, which in turn led to the adoption of “-ville” as a location suffix, over the previously popular “-town.” Again, from Wikipedia:

Its post-revolutionary popularity, along with the decline in the use of -town, was due in part to the pro-French sentiments which spread through the country after the war. The founding of Louisville, Kentucky, in 1780, for example, used not only the French suffix but the name of the French king. The popularity of -ville was most popular in the southern and western (Appalachian) regions of the new country, and less popular in New England.

I vaguely knew what the suffix meant, but I was driving through Tennessee, and it seemed like a majority of placenames ended in “-ville.” For example, driving East on I-40:

I finally got to wondering why it seemed so prevalent in that region.