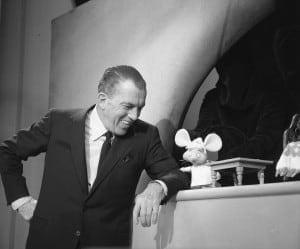 This was an Italian puppet and cartoon mouse, created in 1958. He was introduced to American audiences via the The Ed Sullivan Show on which he made several appearances in the 1960s.

I had always heard the name at the beginning of the video for Tell Her About It from Billy Joel. That video starts with a clip from The Ed Sullivan Show that has Sullivan saying “Thank you, Topo Gigio…” before introducing Billy Joel.

That video was in heavy rotation when I was in high school, and I probably saw it hundreds of times, but I never knew who or what Topo Gigio was.

Then I went to a local performance of the musical Irving Berlin’s White Christmas. The show revolves around a song and dance duo that performs on The Ed Sullivan Show, and there’s a line about Topo Gigio, which rung a bell for me.

What’s odd is that the film White Christmas was released in 1954, and it is also set in 1954, so it predated Topo Gigio by four years. The musical was based on the film, and didn’t come out until 2000.

I found this reference in a review of the musical:

Who would best enjoy this show? Everyone, of all ages, but it does help if you have some memory of the “Ed Sullivan Show” and Topo Gigio, the puppet.

But is that referring to the general appropriate age, or does it mean the reference in the play?

And then I found this:

Several references in the updated book are historically wrong such as the mention about Topo Gigio on the Ed Sullivan Show in 1954, some four years before the character was even invented

So the line must not have been in the movie, and must have been (incorrectly) invented for the musical.