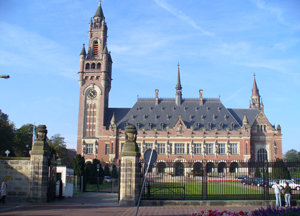 The International Court of Justice in The Hague

This is the third largest city in The Netherlands, commonly known for the International Court of Justice (the “World Court”), which is the judicial arm of the United Nations.

The name was originally a royal hunting ground in the 1400s, and was known as “des Graven Hage” (the Count’s Enclosure or Wood). The city is known as “Den Haag” in Dutch, and this somehow got translated into “The Hague” in English

A book about the oil industry mentioned The Hague several times as the location where international oil dispute were adjudicated.