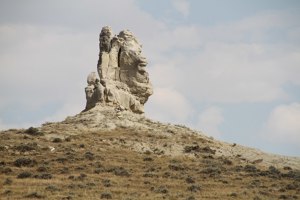 Teapot Rock in Wyoming, which sits on top of the Teapot Dome oil field

This is known mainly as a political scandal.

Teapot Rock is an rock formation in Wyoming that (supposedly) resembles a teapot. It sits on top of an oil field that was discovered early in the 20th century and became known as Teapot Dome. The oil field was owned by the government as a Naval oil reserve.

In 1922, the Secretary of the Interior at the time, Albert Fall, leased the oil reserves to private companies. In the years afterwards, it was revealed he had taken hundreds of thousands of dollars in bribes (worth millions today). The scandal deeply damaged the Harding presidential administration.

This is a very rare case of bribery being proven at the cabinet level, which is likely the highest level of bribery proven in United States government history.

Teapot Rock still stands today. The land was sold to private interests in 2015 and still produces oil and gas.

I was reading a book on the history of the American oil industry. They mentioned this scandal in passing earlier in the book, which is when I looked it up, but then they had an entire chapter on it later.