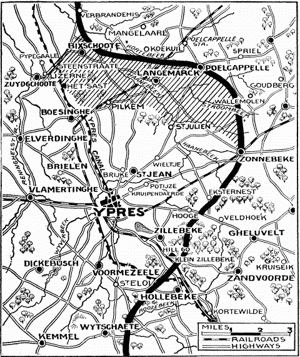 A salient, also known as a bulge, is a battlefield feature that projects into enemy territory. The salient is surrounded by the enemy on multiple sides, making the troops occupying the salient vulnerable.

Geometry dictates that salients require a longer line of defense than a straight line, and they are exposed on three sides.

The word kept coming up in a book about World War 1. Specifically, it discussed the “Ypres Salient,” which was a bulge in the front line around the city of Ypres.

The Allied trenches would have gone directly through the middle of Ypres, but they rounded east in order to encapsulate the city. It was the site of several battles.