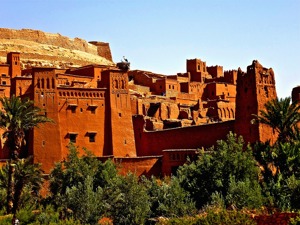 A “kasbah” (it’s an Arabic word, with lots of spelling variations in English) is a type of fortress or citadel in the Middle East, Sahara, and India. The song tells the story of a ban on rock music by an Arab king:

In response to the ban, the people of the story proceed to “rock the casbah,” meaning play rock music in the king’s palace.

This scenario was inspired by the ban on Western music in Iran after the 1979 Islamic Revolution.

The song came on in the gym, and I got to wondering about it.

Some years ago, I had heard that “The Casbah” was a nightclub in Beirut, but I can’t find any evidence of that today. There are a lot of North American clubs called “The Casbah,” but I don’t know if any of them pre-date the song.

In a book about Algiers in 1913, I found the following:

Here, though never our of view entirely, [Muslim Algerians] were only truly dominant in one part of the city: the Casbah. Once, the Casbah had been all there was of Algiers. Now, it was simply the Arab district of a much larger city, a triangle of white rising high up on the hill behind the modern French town. If the Boulevard de la Republique was the shopfront of French Algiers, the Casbah was the citadel of its Arab past. The elegant modern city of Algiers turned its back on the crowded Arab Casbah, trying to forget it, facing the sea instead.

In this sense, “the Casbah” is referred to as the original city center.