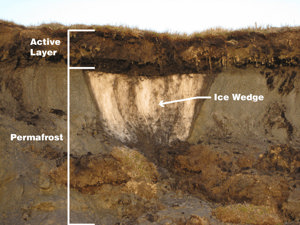 Earth/soil that stays frozen. Dirt has moisture in it, and when it gets cold, that water freezes and becomes hard like concrete.

Often this is a few inches below the surface. The dirt on the surface is exposed to the sun that it will thaw in the summer, but under that is dirt that gets no exposure to the sun, and so it never thaws.

Technically, permafrost is Earth that’s frozen for two years straight, but some areas of the world are frozen year-round.

As climate change raises average temperatures, dirt that is normally permafrost thaws and releases carbon dioxide and biological organisms that have been in frozen suspension, sometimes for centuries.

I don’t remember. I think it was in a book about the oil industry and involved the initial inability for drillers to drill through the permafrost.