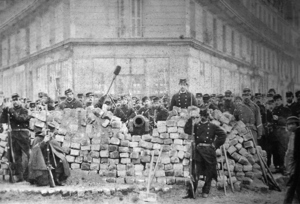 The revolutionaries, called Communards, man one of their barricades in Paris

This was a communist government that seized control of Paris for two months in 1871.

France was concluding the Franco-Prussian War at the time, and the only reason the uprising succeeded is because the army was outside of Paris. In fact, when the war concluded, the army marched back to Paris and re-took the city, killing somewhere between 10,000 and 20,000 of the revolutionaries.

The entire Paris Commune plan might have been questionable, since the country was at risk of being overrun by the Prussians at the time. And if it wasn’t, then the French troops would be free to act suppress the revolution (which is exactly what happened). Thus, the Commune was established under conditions that would never hold in perpetuity.

I saw a book in a used bookstore about the Paris Commune, and was reading the cover. I had no idea what it involved.