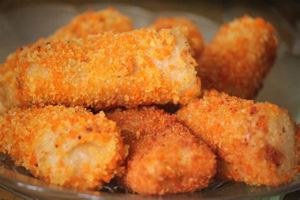 A very crispy type of bread crumb from Japan. It’s made from bread cooked by electrical current so that it has no crust.

In North America, we know panko as breadcrumbs to coat other foods. When a recipe says “panko,” it’s assumed this is the meaning.

I made some breaded eggplant. The recipe called for panko, which I basically assumed to be breadcrumbs. When I was at the store, there were both “breadcrumbs” and “panko,” and I didn’t know the difference.