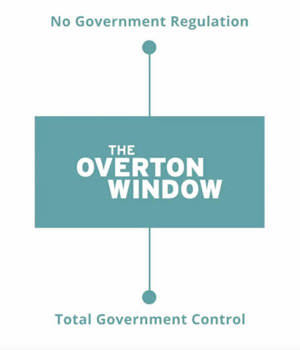 An example of the Overton Window on the spectrum of government control. Many policies fit inside the blue area, and that area might move over time toward either end of the spectrum.

(Credit: Taken from a video at the Mackinac Center for Public Policy)

This is a range of things that are considered acceptable to society or an organization at any point in time.

The window moves, generally towards liberal policies and behavior. What might have been outside the window at one time, can move to just inside the edge of the window, and then to the mainstream.

It was named for Joseph Overton who worked at the Mackinac Center for Public Policy. He applied the window to politics, claiming that politicians will support or deny policies based on where they think the policy falls in relation to the Overton Window.

The Mackinac Center for Public Policy has a helpful video which explains the concept. On that same page, they also have an interactive slider showing how the window might move in relation to a subject like education policy.

The concept is a favorite of theologian and pundit Doug Wilson. For example, in a November 2021 blog post he was discussing how the world is shifting Christians’ consideration of what’s acceptable.

And over time, this is how the Overton Window moves. If you are extremely reluctant to discipline outliers to your left, and have no problem disciplining your outliers to the right, then the organization as a whole is going to move steadily left.

For the record, he was not happy about this.

Searching for “overton” on his website turns up many usages.