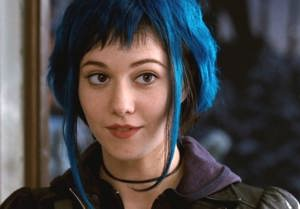 Mary Elizabeth Winstead as Ramona Flowers in Scott Pilgrim vs. the World

A label for a increasingly common stock character in recent film and fiction.

[Manic Pixie Dream Girls] are usually static characters who have eccentric personality quirks and are unabashedly girlish. They invariably serve as the romantic interest for a (most often brooding or depressed) male protagonist.

This is the quixotic and irrepressible girl that forces her bubbly personality onto an otherwise depressed male and rescues him from some emotional torment.

The term was coined by Nathan Rabin in a 2007 review of the film Elizabethtown. Speaking of star Kirsten Dunst:

In a 2014 essay, Rabin apologized for the term:

The trope of the Manic Pixie Dream Girl is a fundamentally sexist one, since it makes women seem less like autonomous, independent entities than appealing props to help mopey, sad white men self-actualize.

There is a less common male corollary: the Manic Pixie Dream Guy.

I found an article called 16 “Manic Pixie Dream Girl” Things Women Have Confessed To That Honestly Have Me Dying on Buzzfeed. I instantly recognized the archetype, though I never heard the name.

A month after I wrote this, I found a humorous tweet: