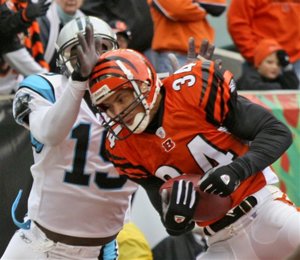 You see this word used a lot in sports to describe an average to slightly above-average player that was played for many teams, never been a star, but has provided a competent background presence.

In fact, the athletic reference to “journeyman” has its own Wikipedia page:

In American English, a journeyman or journeywoman is an athlete who is technically competent but unable to excel. The term is used elsewhere (such as in British and Australian contexts) to refer to a professional sportsman who plays for numerous clubs during his career.

Here’s an article about Joshua Johnson, an NFL quarterback who played backup for 13 NFL teams over 11 years, and three times played a second stint with the same team.

Now, Johnson isn’t a bad quarterback, since he was in the league for 11 years. There is no shortage of up and coming QBs, so if he was an objectively poor athlete, he would have been dropped from the league. But he’s just never going to be good enough to start anywhere. (Remember: there is only one starting QB on a team, and they’re usually the highest paid player, so the bar is very high for that position.)

And just switching teams a lot doesn’t make someone a journeyman. Consider that Moses Malone played for 10 teams in the NBA, winning one championship and being named MVP three times and the All Star team 12 times, then being inducted to the NBA Hall of Fame on his first ballot.

In the end, a journeyman is someone who has a credible but undistinguished athletic career. Attention in the world of professional sports is so tilted to the superstars that we sometimes forget there’s a vast substrate of players that make up “the other 95%” of the leagues.

The word “journeyman” also applies to tradework as someone who is qualified in their field and works for hire – a “journeyman plumber” or “journeyman electrician.”

The same is true of sports: there are lots of people who are best described as “qualified.”

I sort of knew what it meant, but wasn’t total sure. It was a “nod along” word, so I looked it up.

My wife is a kindergarten teacher, and one year someone mentioned that the father of one of her students was an NFL player. She went to his file, and, sure enough, under “Father’s Employer” he had written “Cincinnati Bengals.”

It was Kevin Kaesviharn, who was an professional football safety for 10 years, playing for seven different teams in the NFL and (early in his career) the Arena Football League. He played college football at Augustana in Sioux Falls, and married a woman he graduated with. He lived in Sioux Falls during the offseason.

I did some reading on Kaesviharn. He might have been a journeyman. He played well, started often, intercepted a fair amount of passes (scored a touchdown on one of them), and seemed to be a competent and steady presence on the teams he played for.