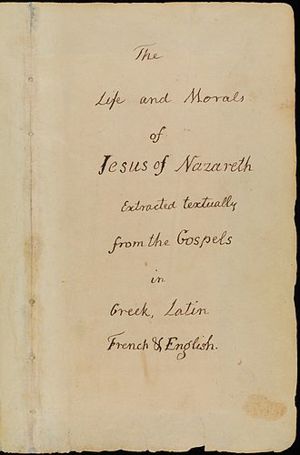 This is a editing of the Bible by Thomas Jefferson. It extracted all of the “life advice” of Jesus Christ from the traditional Bible, but excluded any mention of the supernatural or divine. It essentially distilled the Bible down to secular teachings about morality and behavior.

He described this to John Adams:

In extracting the pure principles which he taught, we should have to strip off the artificial vestments in which they have been muffled by priests, who have travestied them into various forms, as instruments of riches and power to them. […] There will be found remaining the most sublime and benevolent code of morals which has ever been offered to man.

Effectively, Jefferson was saying that divine aspects of Jesus’s life have been corrupted by organized religion, but the validity of Jesus’s moral code remained true.

The resulting work was formally titled The Life and Morals of Jesus of Nazareth Extracted Textually From the Gospels.

In an article entitled Why You’re Christian, David Perrell writes about “cafeteria Christianity”:

This a-la-carte philosophy isn’t new. It’s what Thomas Jefferson did two centuries ago when he wrote the Jefferson Bible. Specifically, he reduced the Bible into a self-help book by removing all the miracles but keeping the sound life advice. The problem is that you can’t pick and choose theology without becoming a slave to intellectual fashions or destroying the integrity of those ideas in the first place.