The Interwar Period And The Lost Generation 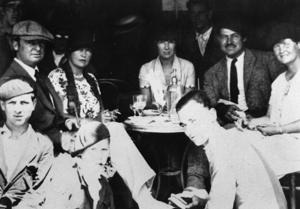 Ernest Hemingway (right; in tie) and friends in Paris during The Interwar Period

As the name would suggest, The Interwar Period are the two decades from 1919-1939, between the end of World War 1 and the beginning of World War 2.

The Lost Generation refers to adults in their early 20s during the First World War (born in the last 1800s or so) who spent their early adulthood during the Interwar Peiod.

This cohort experienced the horrors of that war and its aftermath, and the effects of The Spanish Flu Epidemic of roughly the same time period. In that context, “lost” can refer to a general feeling of malaise and nihilism.

“Lost” might also be used to refer to those who died in the war. World War 1 claimed almost 10 million lives, mostly male. This means that a large portion of the working force was eliminated (“lost”), leading to increased independence for women, as many lacked marriage prospects.

“The Lost Generation” is also used to refer to a group of American expatriate artists and writers living in Paris, including Gertrude Stein (who invented the term), Ernest Hemingway (who used the term in this book The Sun Also Rises), and F. Scott Fitzgerald.

I’ve been doing a lot of reading about World War 1. Both of these terms come up a lot. I also enjoyed the film Midnight in Paris which is largely about The Lost Generations artists.