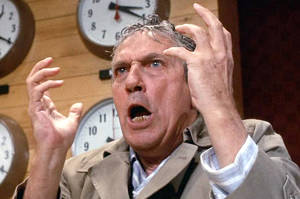 Howard Beale is a character in the 1976 film Network. He’s a news anchor who is troubled by the poor state of the world. At one point, while on the air, he is overcome with anger, and tells his watchers to open a window and scream into the night, “I’m as mad as hell and I’m not going to take it anymore!”

Beale is considered symbolic of someone so justifiably and righteously angry about something that they reach their breaking point and go over the edge.

In an article about an outspoken New York restaurateur, he is referred to as “a Howard Beale for the Instagram generation.”