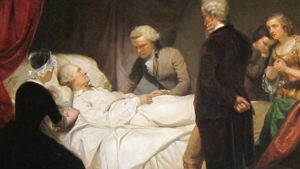 This was an era of medicine in the 1700s and 1800s where physicians performed extreme treatments on their patients in an attempt to “shock” them out of whatever condition ailed them. Treatments such as bloodletting, purging, and sweating were common. These very likely caused more deaths than they prevented.

There is some evidence that George Washington was killed after several days of heroic medical procedures meant to cure what may have simply been the flu. Close to 50% of his blood was removed before he finally died.

A book about increases in life expectancy had an entire chapter on the history of heroic medicine. I encountered the word and put in on my list to look up, and ran across the definition a couple minutes later.