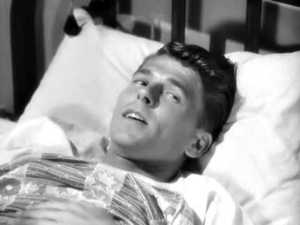 George Gipp was a football player at Notre Dame in the late 1910s. His nickname was “The Gipper.” He died of an infection during his senior year.

In the 1940 film, Knute Rockne, All-American, he was portrayed by Ronald Reagan. In his deathbed scene, Reagan implores his teammates to “…win just one for The Gipper.”

This character and line of dialog followed Reagan throughout his later political career as Governor of California and eventually President of the United States. Reagan was often referred to as “The Gipper,” and his political victories were sometimes framed as “winning one for The Gipper.”

I read the book “Tip and The Gipper: When Politics Worked” which was about the unique relationship Reagan had with his Democratic adversary, Speaker of the House Tip O’Neill.