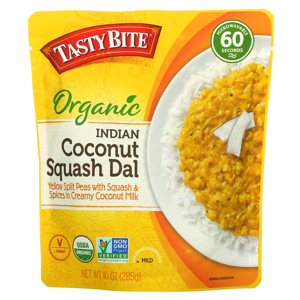 This is clearly not traditional Indian dal, but it is a version I tried that prompted me to look it up. I still love this particular flavor, but Costco stopped carrying it, and I can’t find it anywhere else.

The Asian name for split legumes, or for soups made from these.

Split pea soup, for example, is a form of dal. You can make a dal from any split, boiled legume.

For no reason at all, I bought a box of “Indian Coconut Squash Dal” from Costco. It was spectacular – kind of a thick soup which I ate by scooping it up with bread.

The description on the front of the box reads:

A half-Indian friend of mine said that dal was a very common staple of Indian food. I figured there had to be a generic base for dal, and what I bought at Costco was just a variation.