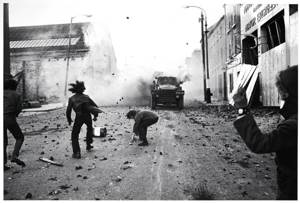 Lots of people have been killed on Sundays, and the phrase is used to describe lots of mass killings. Wikipedia shows 20+ events that are connected to the phrase.

The most recent event and the one most clearly associated with the phrase from this generation is a 1972 shooting of protesters in Derry, Northern Ireland by the British Army. In a 45-minute span, British paratroopers shot 29 people, 14 of whom would die (13 immediately; one months later of his wounds).

Two official investigations of the event were conducted. They conflict.

In 2015, Soldier F was arrested for questioning. In 2019, he was charged. However, the charges were dropped in 2021 when evidence was deemed inadmissible.

Soldier F has since been identified.

I remember the U2 song “Sunday, Bloody Sunday.” The lyrics go:

I can’t believe the news today
Oh, I can’t close my eyes and make it go away […]

My reading of the lyrics strikes me as less a recounting of the specific event, and more just a polemic against The Troubles in general.

Then, in late January 2022, the NY Times published a long feature commentating the 50th anniversary of the event –

The events themselves took a matter of minutes to unfold in a paroxysm of one-sided gunfire that snuffed out more than a dozen lives, each one of them a new martyr in Northern Ireland’s somber annals of loss. But the effort to unravel what happened in those brief moments – to parse the antecedents and the outcomes, to trace the lines of command on the grisly day that became known as Bloody Sunday – devoured years of costly inquiry.