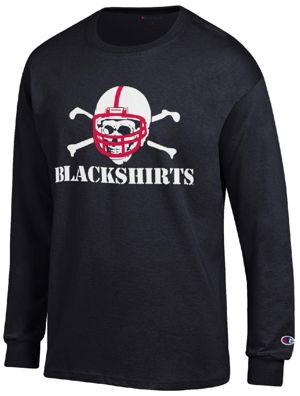 In the context I decided to investigate, it refers to the starting defense of the University of Nebraska Cornhuskers.

To differentiate players during practices in the 1960s, the Nebraska coach put his defenders in black jerseys, and the name stuck. When Nebraska keeps opponents to a low score, it is attributed to “the Blackshirts.”

Unfortunately, the term originally referred to a volunteer militia in Communist Italy in the 1920s, 30s, and 40s. They wore a black shirt under a military uniform.

The specific name “Blackshirts” was copied by several racist organizations in other countries in the following years, or the general theme of a colored shirt for a political movement (Yellowshirts, Blueshirts).

Most notably, the “Brownshirts” were the paramilitary wing of the Nazi party in Germany.

I was visiting my daughter at the University of Nebraska when the Cornhuskers played the much higher-ranked Oklahoma Sooners. They lost, but managed to hold the Sooners to a low score, so I heard several news reports about the success of “the Blackshirts.”

I thought the term had some historical meaning, but I couldn’t remember what.