How did this get associated with big things? 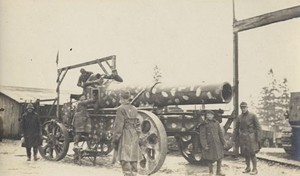 Bertha is a German name.

There are two threads of history for this reference –

First, Bertha Heyman was a Prussian con artist who swindled money out of men in eastern America and Canada in the late 1800s. She was a large woman – supposedly 5-foot-4-inches and 245 pounds.

Second, in World War I, the Germans unveiled a truly huge artillery piece – a 420mm cannon (for comparison, the largest cannon used by the United States Army today is only 155mm).

The German soldiers nicknamed this weapon “Big Bertha,” after Bertha Krupp. She was the heir and controller of the Krupp family’s industrial empire, who manufactured the cannon. Pictures of Bertha don’t reveal her to be a large woman, so the name was probably just because she was the head of the Krupp family at the time the cannon was manufactured.

(Did the German soldiers know of Bertha Heyman? I don’t know.)

German newspapers began using the name, which led to the Allies using it to refer to any of a number of large German cannons.

From the Wikipedia page for the cannon:

The name has since entered the public consciousness, for example being applied to a line of Callaway golf clubs, and the name for the satirical French magazine La Grosse Bertha. Mario Draghi, President of the European Central Bank, referenced Big Bertha in a 2012 interview with the Frankfurter Allgemeine Zeitung as a metaphor for his bond-buying policy.

From the Wikipedia page for the name:

In modern times, the name is associated with an unusually large example of a class of objects.

I ran across a woman named “Bertha.” I saw a picture, and she was quite slender. I immediately thought, “well her name doesn’t fit”… and then I wondered how we started associating “Bertha” with large things in the first place.