How do you play this? 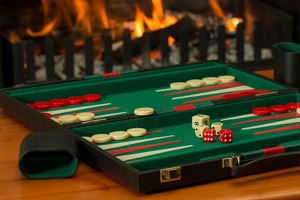 Backgammon is basically the original version of the modern board game Sorry!.

The pieces start in a specific pattern, and the two players are moving in opposition to each other – one counter-clockwise and one clockwise, so their pieces “collide” and have to move “through” each other to get to their destination.

(Note: the fact that the board has little pointy triangles (called “points”) has no significance – they could just as easily be boxes or “spaces.” Also, you can have as many pieces as you want on a point. It doesn’t matter if they stretch beyond the physical mark on the board. Stack them up, if you like.)

Players roll two dice, then move their pieces the number on the dice – either two pieces, one for each die value, or the die values combined for one piece. If the player rolls doubles, they get four total moves, as if they rolled the same number on four dice.

There are two important movement rules which introduce all the strategy:

The basic strategy is to move your pieces around the board to your final quadrant, then get them all off the board, all the while preventing your pieces from being unprotected (all alone on a point), and kicking your opponent’s unprotected pieces back to the start whenever possible.

Winning a game (by getting all your pieces one space off the board before your opponent), gives you points:

A single game usually takes anywhere from 5 to 15 minutes. A match is multiple games. Playing to five or seven points is common.

There is another significant strategic element to the game: the “doubling cube” or “doubling die.” It is optional, but changes the nature of match play considerably –

A key point: those are the only two choices – the player cannot decline and keep playing.

If the player accepts the doubling, they keep the cube on their side, and they can choose to re-double to 4x at any point in the future. Again, the other player can accept the re-doubling – so now they’re playing for 4, 8, or 12 – or concede the game and the two points (because it was previously doubled).

A player that accepts a doubling keeps the doubling cube and only they can choose to double again. A game can theoretically be doubled six times, in which case it’s worth 64, 128, or 192 points. Every time the stakes double, the cube is passed back and forth between players.

A lot of games will end on a concession (“doubling out”), because it’s often obvious to a player that there’s no way they can win, and they’d rather give up one point than take a chance of giving up two. A player might just be waiting for a good roll which tilts the odds in their favor and gives their opponent no rational choice other to concede rather than double.

I asked on the backgammon subreddit about doubling and if it’s required. The response:

No, you don’t have to use the cube, especially if you’re just playing for fun. The cube is always used in tournament (match) play and is pretty much always used when playing for money in general

My childhood friend Joey had a backgammon set, and I never knew how to play, but I loved the set. It was made of leather and was in a little case that latched shut. I always meant to learn how to play.

My wife and I were looking for new games to play, and I thought of backgammon and how I had always wanted to learn it. I bought a nice wooden set for $50.

To learn how to play, I used the free online versions at these two sites:

I also remember the backgammon scene from the James Bond movie Octopussy. In the scene, the villain – Kamal Khan – doubles the stakes, then uses loaded dice to roll double sixes. Based on a brief shot of the board, this appears to allow Khan to move past a blockade of an extended series of points with two or more of his opponent’s pieces (called a “prime”).

Bond sees Khan cheating. When Khan’s opponent refuses to double, Bond steps in to play his position but demands to use Khan’s dice, which, of course, allows Bond to win.

In the scene, they really don’t show the board clearly enough to guarantee the validity of the gameplay.