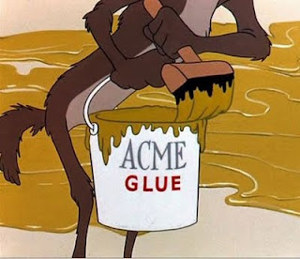 This is a word from Ancient Greek which means “peak” or “apex.”

Most people (of my generation, anyway) know it as the fictional company from the Road Runner cartoons. However, there have been many actual companies called “Acme,” many of them founded far before the cartoon made the name famous.

The name was likely also popular because the first two letters positioned it at the front of alphabetical company lists, like the phone book. Another rumor claims that several early business textbooks used “Acme” as the name of sample companies.

There is another rumor that the name stands for “A Company Making Everything,” but this is likely invented after the fact. The only context of “Acme” being a company that makes a wide variety of goods would have been the cartoon, and there is no confirmation of this.

A company named “Acme” was mentioned in a PBS miniseries about the oil industry. I had only known the name from the cartoon.

A week after writing this, I was on the interstate and saw a truck from “Acme Transport.” Honestly, I think this was the first time I have even seen this “in the wild.”