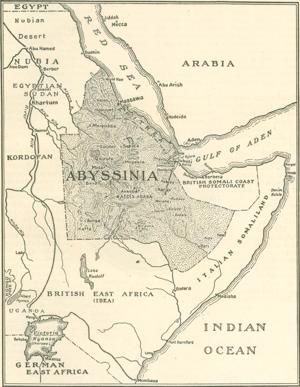 An ancient name for Ethopia, or the Ethiopian Empire or Kingdom, which historically included the present-day country of Eritrea. It existed from the 1200s to the mid-1970s when Haile Selassie died.

Ethiopia controlled Eritrea from the 1950s to the 1990s, which is re-gained independence.

Not to be confused with “Assyria” which was an ancient kingdom which stretched across much of the Middle East and down into the Nile area of Egypt.

It came up in Cutting for Stone several times.

I was reading an obituary for fashion designer Andre Leon Talley, and it said he faithfully attended the Abyssinia Baptist Church in Harlem. I went to their website, and found this in their history timeline:

A group of African Americans (12 women and 4 men) who refused to accept segregated seating in the First Baptist Church of New York City formed The Abyssinian Baptist Church in lower Manhattan. The church name was inspired by the ancient name of Ethiopia, Abyssinia.