Out on Zzyzx Road 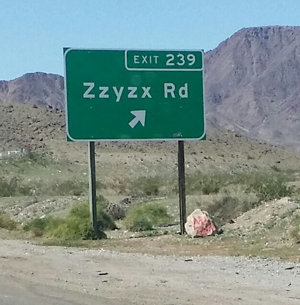 In March 2017, I attended a conference in Las Vegas. It was three days long, and my wife flew out to join me, which was fun. She flew home at the end.

I had rented a car to drive around with Annie. It was a late-model Cadillac CTS, and it was nice except for a rubbing noise it made when you turned left.

After the conference, I needed to go pitch a potential new client in Inglewood, California, which is somewhere in the Los Angeles metro. I love to drive through the Midwest, and I had a car, so I figured I’d drive it instead of flying.

Las Vegas to Los Angeles is just as much south as it is west. The route goes right through the Mojave Desert. I prepared for four hours of nothing.

But, as it turns out, there are a lot of cars out there. While on I-15 South, I was never more than a dozen car lengths or so from another vehicle. In fact, going over the mountains just south of Vegas, I came to a halt in a traffic jam around some construction. It turns out there’s a lot of traffic on this road.

About halfway through the drive, I-15 goes through Baker, California, which is known as “the gateway to Death Valley.” There’s a big thermometer right on the main road, and this is where you can go north on Highway 127 to the hottest place in the world.

Just past Baker is where there’s an exit to Zzyzx Road.

It was built in the 40s by a guy named Curtis Howe Springer, who was something of a medical quack. He created a “health spa” out there in the middle of nowhere. In a nod to clever marketing, I suppose, he named the place Zzyzx in attempt to be the last word in the English language.

(How do you pronounce this? I’m going with “zizz-icks,” though I have no idea.)

It turned out that Springer had no claim to the land. He was charged with squatting by the federal government in 1974 after he had been out there for 30-some-odd years. The land was formerly known as Soda Springs, but Zzyzx stuck for whatever reason.

The place of Zzyzx is serviced by Zzyzx Road. There’s a sign on I-15 for the exit (the sign is pictured above).

I had seen this word in various contexts in the past – trivia books and whatnot. I vaguely remembered that it was “the last word in the English language” and there was some novelty behind the name. I had some memory of it being named as a joke. (There were also movies – see below.)

So I exited the interstate on an impulse. I had no time pressure, so I figured I’d go for a little adventure.

I turned right and drove north on Zzyzx Road, but it dead-ended in a clearing after about 200 yards. There was an abandoned car here, I remember.

So I turned around and headed south, back across the overpass at I-15, under which dozens of cars were whizzing by.

I remember the road was dead straight and just perfect. This is the middle of the Mojave desert, remember. Coming from the Upper Midwest, I know how much havoc moisture and freezing temps will cause roads. The roads in Sioux Falls as a constant mess, but this road was utterly pristine despite being in the middle of nowhere. Take away the cold and the water, and roads stay perfect.

I followed the road for a mile or so. There was nothing but scrubland on either side. Nothing grew more than a few feet tall. I think there was actual tumbleweed.

I could still see I-15 in my rearview mirror. There were lots of cars and trucks moving across my field of view in the distance. In my memory, I can hear them, but I’m sure that’s just a projection.

But then the road curved around a short, squat mountain. It was still paved, but as I drove on and the mountain slid across my rearview mirror, I was suddenly and completely alone.

It was at that moment that I was struck by the absolute enormity of the California desert, and of the wilderness in general.

I don’t really like the outdoors. Other than a stint in the Navy when I was assigned to a Marine Corps rifle platoon, I’ve never slept under the stars. I’m content to remain securely in civilization with a roof over my head. Given my history, I may as well have been on Mars.

I stopped the car and got out.

But at that moment, in between those two places and events, there was just nothing. Other than the road I was standing on, there was no vestige of civilization. It was dead silent and empty. The real world was unscripted.

I thought to myself that anything could happen out there, and no one would know. I was momentarily scared. I looked around for wild animals – I don’t know, a coyote or something – but there was nothing.

What if there was? I could get attacked by a pack of wolves, killed, eaten, and when would someone find the car? How long until someone came to look for me? Would anyone know I had exited the interstate at Zzyzx Road? Would someone remember a beige sedan rounding the mountain off in the distance? Did the rented Cadillac have GPS? Was it pinging a satellite somewhere?

If you’re the outdoorsy type, you might be reading these words with some sense of amusement. I might seem adorable to you – a baby adventurer, out of direct line of sight of Mother Civilization for a second, getting panicky.

But for me, at that moment, I was struck by how much I depend on civilization for my sanity. How much I need people and concrete and laws and rules and social norms to make sense of the world. I am so very rarely in uncontrolled situations.

But out here, there was nothing. I could have disappeared completely.

I never watched Breaking Bad, but I know that a lot of the action took place in the desert somewhere. I suddenly had visions of a meth lab nearby. Like, if I rounded the next corner and stumbled onto a drug operation, would I find myself in a barrel, buried under the sand, never to be found?

Yet I was weirdly determined to see what was at the other end of the road. I had come this far, and perhaps this was some sad gesture of protest and rebellion.

I got back in the car, and continued to drive.

Unfortunately, the road eventually turned to gravel, covered in sharp rocks. I had visions of the Cadillac slicing a tire open, and then what? It was late afternoon. I might not be able to walk back to I-15 by nightfall. I was wearing wingtips, for God’s sake.

I saw something off in the distance – maybe buildings? – but it was a long, long way from here to there.

I lost my nerve and turned around. I did 10-point turn because the road was narrow, and I was worried about getting a wheel too far off in the weeds. Lots of horror movies have started that way.

Why am I writing about this?

Partially because I just read a book of essays by an author who told stories about seemingly normal moments that held some significance for him. This got me thinking that everyone has stories inside them that never get told.

I don’t think I’ve told anyone about my experience on Zzyzx Road – the few moments I spent standing there, behind that mountain, being dwarfed the enormity of the Mojave, and of becoming aware of the punishing insignificance of the six-foot-ish miracle of biology that my soul inhabits.

My flesh and blood was nothing against thousands of square miles devoid of anything I would need to stay alive, teeming with things that would try to kill me, and so far away from anyone who could help.

“Life-altering” seems like a big phrase, but it doesn’t have to be. Your life can be altered in big ways and small ways. In some small way, I was altered by those couple of minutes.

I’ve never been much of a camper. I’m still not. But I think I get it now.

What is at the end of Zzyzx Road?

The remains of Springer’s health spa it turns out. And part of this has become the Desert Studies Center of California State University. I don’t believe it’s staffed all the time, so there’s a good chance no one would have been there.

Thanks to Google Maps, you can see it all now. There are no secrets from satellites.

And there are lots of relevant Wikipedia pages:

Weirdly, there were not one, but two little-known horror movies released within a couple months of each other in 2006 about this same road.

The plot of both films revolve around the basic truth that Very Bad Things™ could happen in the middle of nowhere, and no one would know about it.

Finally, I actually tweeted pictures of some of this trip.

(According to this tweet reply, I say that I did my exploring on the way back to Vegas the next day, but the dates are off. I tweeted that on March 7, and I would have driven back on March 8? Honestly, I don’t remember. I might be mis-remembering the timing of all this, but the substance is accurate.)

I didn’t take any pictures out on Zzyzx Road, and I’m glad I didn’t. This story just exists in my memory, imperfect as it is.