Modular: The Web’s New Architecture and How It’s Changing Business 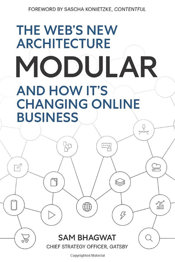 This is a tough one to review because I’m very close to it – I know Sam, and he mentions me quite a bit in the book, including a lovely acknowledgement.

That said, this book is…aspirational. It’s presenting a goal for how Sam wants the web to be. Sam makes claims in here about what’s happening on the web. I don’t agree with all of them.

One of the problems with this book and others like it, is that the authors tend to suffer from sample bias. Sam and his company Gatsby are very much on the forward edge of technology. And they deal with customers and prospects who are on that edge as well.

What they forget about is the other 95% of people. There are so many developers who just aren’t out there, and probably never will be. They don’t need to solve the problems that Gatsby solves, so they never show up on that radar.

Scott Hanselman talked about these in a blog post called Dark Matter Developers: The Unseen 99%. He said:

Where are the dark matter developers? Probably getting work done. Maybe using ASP.NET 1.1 at a local municipality or small office. Maybe working at a bottling plant in Mexico in VB6. Perhaps they are writing PHP calendar applications at a large chip manufacturer.

Very true. There are a lot of people doing great work with older technologies that we never hear about.

Additionally, I worry that sometimes we solve “problems” on the web just because we want to. I’m not saying this is the case with Gatsby or JAMStack or whatever, but it’s not uncommon for us to get all caught up in the gee-whiz of something and put in way more effort than we need to because it’s just…well, fun.

I struggle when someone “assumes a problem” and declares a new standard for something. You can’t just summarily declare the old thing isn’t working, just because you want the new thing. There’s something Donald Trump-ish about – just keep saying the same thing over and over and louder and louder and people will believe it’s true. “Many people are saying,” and all that.

But, for the book itself – it’s fun, if you’re a web developer. The chapters are short, and it’s a look through everything that got us to this point and where we might go tomorrow. In particular, I did very much enjoy the book’s view of the history of the web. I spent a lot of time in that period, and it brought back memories.

Here are some notes I took on the acquisition of this book:

Sam (the author) gave me this book. He first sent me a print-on-demand version, which I started. Then, when I saw him in San Francisco for a CMS Experts meeting, he showed up with a box of the finished version.