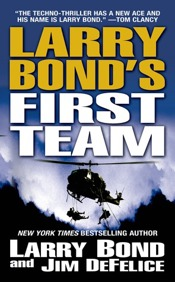 I read this book because I loved Red Storm Rising (which Bond co-wrote) when I was in high school, and was looking for a way to recapture that. The result was mixed. This book was less “nation states at war” and more “special forces beats the terrorists.” The plot was very human-oriented, which wasn’t quite what I was hoping for.

In the end, it’s a standard techno-thriller about a four man “Special Demands” group that outwits some terrorists. I had some trouble following some of it – there were a couple places where I couldn’t quite figure out why the characters where in a certain place and what they were doing.

Additionally, there were two plot points in particular that I just thought were ridiculous [SPOILERS]:

Regardless, the ending of the book is undeniably exciting, and there’s all sorts of military bravado throughout. The characters are a little thin (I never figured out the difference between Rankin and Conners), and the dialogue is super-manly and cliched, but I didn’t really expect anything less.

It was okay. If you like Clancy-esque techno-thrillers, this one will probably be right up your alley.