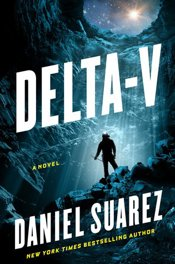 Daniel Saurez writes about the future…but not too far into the future. His books are all about the world in 10-15 years, which is “the future,” technically, but not so far out to be unrelatable. Saurez writes about a future state that feels very real, and he designs it in such a way that you think, “yeah, I could totally see that happening.”

This is his first book about space (I think – there are two I haven’t read). It’s specifically about how we might mine asteroids in deep space, and why.

Turns out, asteroids have a lot of resources, but the real value is that those resources are already in space. The value is getting them back to an orbit around the moon so they don’t have to be launched out of Earth’s gravity, which costs absurd amounts of money. We can get all those same resources on Earth, but the fact that they can be mined out in space and never set foot on Earth and its really expensive gravitational field is what’s actually valuable. This had never occurred to me, and the revelation was really cool.

The story involves what this first expedition would look like, both from a very technical level, and from a business level. Not only do you have the miners out in deep space trying to survive, but you have the business and financial backers back on Earth trying to hold the whole thing together from a finance, legal, and PR standpoint.

(One word of advice though: there are pictures of the different spacecraft at the back of the book (the Kindle version anyway). Find those and look at them before the story, and refer back to them often. The story is obviously spacecraft-centric, and descriptions of them can be detailed and confusing. so a picture helps. I didn’t find the pictures until I was done. Seeing them during the story would have really helped.)