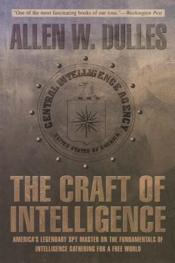 This book was probably great back in 1965 or so when it was written, but it’s dated, 50 years later. There are several sections on the actual practice of intelligence, which may or may not less relevant today. Additionally, the communications revolution of the last 25 years has no-doubt changed a lot.

The book was…okay. Dulles was a legend, and it was a decent primer on how intelligence works. However, when filtered through an intervening half-century, I’m not sure I learned much beyond the points I mentioned above.