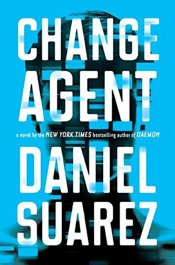 I enjoy Suarez – I’ve been reading him since “Daemon,” which was so good.

He has a great ability to envision how technologies we deal with today would be manifested in extremes down the road. The visions of the future that he puts together are scarily realistic. You’re reading it and thinking, “Crap, I hope that’s not how it ends up…” but you’re pretty sure it will probably end up just like that.

This book is about gene editing, brought about by the discovery of CRISPR in 2012. It’s set in 2045, where in vitro gene editing is common, bu illegal. Ken Durand is a special agent of Interpol who searches for these illegal clinics and shuts them down.

One day, his adversaries figure out how to do “in vivo” gene editing, which means altering the DNA of living, breathing humans. So, you’re DNA could be changed out from underneath you, so to speak. In short order, they have turned Durand into someone else – someone less…desirable to be, so to speak.

The book raises some interesting issues about identity. If someone changes your DNA, which changes how you look, then are you still you? How do we identify people? If Person A is accused of a crime, and they can alter their DNA into Person B, then can they claim they’re not Person A at all? And it’s true – they’re not. Where does the guilt lie? What biologic or chemical constructs make us…us?

Unfortunately, the book loses its way in the third act. there’s a long sequence where they’re warning around in the jungle, and I had to keep reminding myself why they were there. Additionally, the final villain resolution was unsatisfying.

Still, not a bad novel. I’ll read more Suarez in the future.